The Harvard Graduate School of Design’s Future of Streets Spring 2019 option studio in Los Angeles investigated how LA is changing towards a more transit-oriented and denser city on the one hand and becoming a hot battleground for private-sector mobility technologies on the other. The studio investigated the opportunities and tensions that these two parallel developments in LA introduce for different socio-economic groups and explored strategies and tactics that could maximize multi-modal, socially inclusive, and environmentally sustainable outcomes.

“Highways as Public Transit Infrastructure” explores an alternative to the rail network expansion planned in Measure M. In the suburbanized LA context, the extensive highway network supports long-distance commuters. It is however exclusive to car owners and those who can afford rideshare services. This project proposes to use LA’s existing highway network for public transit to offer more equitable and efficient mobility for the future of Los Angeles.

In Los Angeles, 64% of Metro riders transfer at least once per trip, yet the city’s existing street design prioritizes level of service for cars. This project imagines a new Vermont Avenue built for pedestrians, transit riders, and cyclists, with a focus on improving the experience of people who change from one mode to another on this key corridor.

Change the Street, Transform the City

The existing model of transit oriented development has failed to create truly walkable communities. This project proposes an alternative approach, through radical community driven transformations, it seeks to imagine how existing neighborhood commercial areas could become mixed-use, dense and walkable centers, connected together via a network of transit boulevards.

Mutualism: A win-win model for communities and developers

Existing mechanisms of Transit Oriented Development in Los Angeles usually focus on a negotiation between developer and city agencies, with little opportunity for community input. ‘Streets as Mutualism’ seeks to imagine a process in which TOD can be transformed into a community driven process. Through the usage of a ‘Community Improvement District’ mechanism, a greater number of community focused amenities can be provided on the streets while protecting against displacement.

Mobility as Equality: Building Towards the Olympic/Post-Olympic LA Transit

Transit Oriented Development in LA has often failed to yield increased ridership in part due to the demographic of those moving into new housing adjacent to transit. In an attempt to reverse this demographic mismatch, this project proposes a better coordination between transit planning, new public housing provision, and street design around the Vermont Station on LA’s Expo Line, leveraging the 2028 Olympics as a catalyst for rapid progress.

With 19% of L.A’s metropolitan core being occupied by parking, the development of parking offers a tremendous opportunity to address the city’s affordable housing, need for green space and lack of community amenities. This project investigates what L.A. could gain from reclaiming a portion of current surface parking lots around largescale venues, such as the Staples Center/LA live. By offering Los Angelinos new experience of going to large venues by public transit, this project seeks to change the city’s car-oriented culture and people’s conception about public transportation. 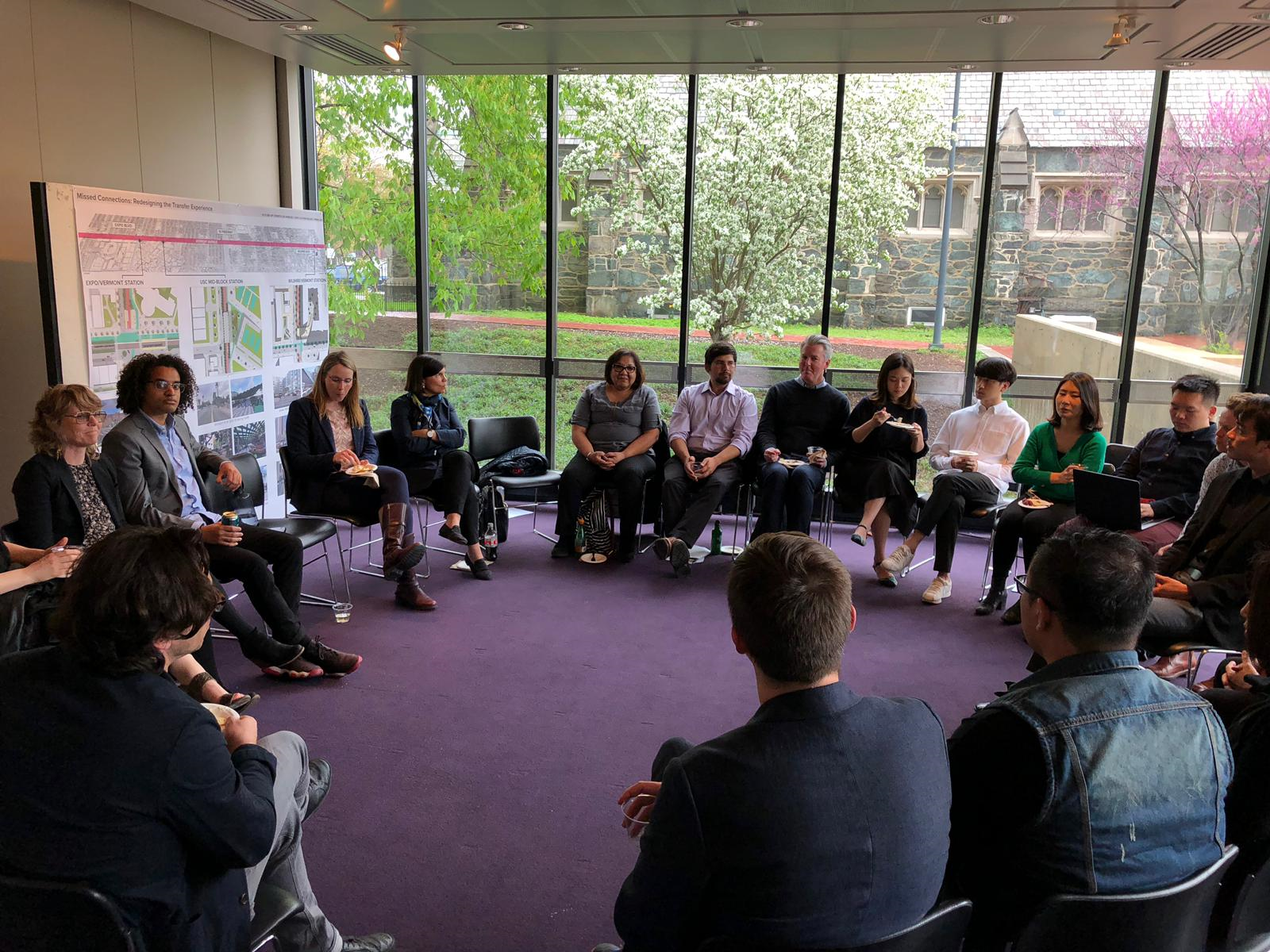 The studio focused on sites surrounding the Expo Line, leading from downtown LA to downtown Santa Monica and explored how the experience of urban travel along the transit corridor could change with the densification of the built fabric, continued investment into transit-oriented communities as well as the advent of automated, shared and electric vehicles. By focusing explicitly on neighborhoods adjacent to a Metro rail line, the studio explored ways in which new mobility technologies could be nudged to complement, rather than compete with public transit options. Towards that end, our focus on shared, electric and automated vehicles predominantly centered on truly shard modes – buses and shuttles. A number of groups explored how lower operational costs resulting from automation could help achieve denser schedules, a more personalized ride-booking interface, improved station designs as well as a better integration with the built environment that surrounds stations. Sites included the USC area, which will serve as the epicenter of LA’s 2028 Olympics, and transit catchment areas around Pico, Exposition Boulevard, Vermont and Crenshaw.
Our work was divided into three phases. The first phase explored the relationship between mobility patterns and built environment in Greater Los Angeles. Student teams developed case-study analyses of existing over- or under-performing Metro rail stations in the LA metropolitan area – stations that are attracting relatively more or less passengers than the number of residents and jobs in their surrounding walksheds would suggest. All of the chosen case-study locations were outside the Expo Line corridor to familiarize the studio with the broader built environment of LA. The second phase of the studio, which started during our week-long trip to LA in February, shifted focus to our main study area – the Expo Line corridor. Student teams investigated the area’s current mobility modes, urban form, land use patterns and demographics and delivered mid-term proposals that explored potential changes in both transit investments and street systems along the entire Expo line corridor. The third and final phase of the studio challenged each team to choose at least one key street / transportation corridor in their study area to elaborate in greater detail how newly envisioned interactions between mobility, urban form, land-use patterns and demographics could unfold in the public right-of-way in ways that lead to socially-inclusive, environmentally sustainable and urbanistically desirable outcomes.

The studio involved thirteen students from three different degree programs at the GSD – Urban Design, Urban Planning and Landscape Architecture, who were organized around six interdisciplinary project teams. The first project by Sunmee and Yuebin explores new mass transit investments adopted in 2016 as part of Measure M – a sales tax increment that will provide $40 billion for new Metro rail lines in LA county by 2047. Exploring an alternative to the planned rail investments, the project investigates how the unique grid of highways that covers LA could be used for dedicated bus rapid transit to achieve five times more new coverage and reach three times more low-income households, while using the same budget as the present metro rail expansion plan. By focusing on highway reuse, the project also seeks to address historic injustices targeted towards low-income communities of color that were cut off and destroyed with highway construction in the past. Solomon’s and Yuzhou’s project investigates how tactical changes in street design and street use around Crenshaw Boulevard could incrementally produce new community retail and service centers, radically transforming both the public realm of the street and the built fabric of LA. Amanda, Weishiang and Xin’s project attempts to address and reverse the geographic mismatch between transit service and rider demographics in LA. By exploring a better coordination between bus service, public housing provision, and street design, the project sees the 2028 LA Olympics as a major opportunity to deliver a new-generation bus system for the city, converting Olympic housing to public housing, and delivering amenity-rich streets that not only cater to the Games, but also deliver a much-needed legacy of amenities to the surrounding marginalized communities. Sang Yoon and Dora’s project explores ways in which the right-of-way of streets could be used to generate lacking amenities and green spaces for historically marginalized communities of color around the USC campus. Building on LA’s rich legacy of Business Improvement Districts (BIDs), they instead propose Community Development Districts (CIDs) – a new funding mechanism that would enable communities to obtain and guide investments to public spaces and amenities from gentrifying real-estate developments that takes place in their neighborhoods. Lanchun and Bailun’s project explores new uses for parking that may be opening up with mobility as a service (MaaS) future. Focusing on the Pico area, which hosts a number of LA’s major entertainment venues – LA Live, LA Expo and Staples Center ¬– their project demonstrates how parking re-use could help make a substantial contribution to LA’s affordable housing shortage and green space access in a densely built-up area. Finally, Finn and Linyu’s project explores better transfer experiences between LA’s public transit options. Focusing on the Vermont corridor between Exposition and Wilshire, it demonstrates how new street layouts, station designs, and transit-oriented development could improve both the travel experience for individuals and the quality of the public realm for communities in LA.

The studio collaborated with a number of public, private and non-profit organizations in LA. City of LA’s Department of City Planning, Department of Transportation, Mayor’s Office and LA Metro were our public sector hosts, supporting site selection, data assembly, local stakeholder outreach and critical feedback. We also teamed up with two important community development, housing and transit justice advocacy organizations – T.R.U.S.T. South LA and Alliance for Community Transit (ACT LA), who work around the studio sites in South LA and beyond. Both of these organizations helped the participants of the studio learn and incorporate the challenges that South LA’s communities have historically faced and continue to face vis a vis transit and city planning. We are particularly grateful to T.R.U.S.T. South LA for hosting a participatory design workshop in their office during our site visit, which enabled GSD students to co-produce and co-imagine with T.R.U.S.T. South LA, ACT LA, Motor Avenue Association, Community Arts Resources (CARS) and Ride On! Bike Shop/Co-Op staff. From the private sector, the studio was generously sponsored by Renault/Nissan Future Lab and Ford Smart Mobility group. The Future Lab staff also organized a unique immersive travel experience for the studio, where students adopted socio-economically representative “personas” for a day and experienced LA’s mobility options first-hand within realistic budgets and between realistic origins and destinations. During our site visit to LA, Rios Clementi Hale (RCH) landscape architecture studio also hosted a GSD alumni gathering and a panel debate around the topic of the studio. We are sincerely grateful to each one of these organizations for supporting the studio and look forward to collaborating again in the future.