Eliel Saarinen’s 1913 Masterplan for Grand Tallinn proposed a 4 mile-long sunken channel to connect the city with its eastern expansion district – Lasnamäe– via mass transit and a number of symbolic civic squares. In the aftermath of the Second World War, the occupying Soviet government picked up the unbuilt idea but shed Saarinen’s perimeter blocks and bourgeois urbanism. The Soviet regime instead built out Lasnamäe as a set of eleven standardized Micro-regions, each comprising pre-fabricated 5, 9 and 16 story housing blocks along with a rationally allocated daycare, school, and commercial center. The channel, cutting through the entire length of the district, was blasted into solid limestone bedrock at such a great expense that no resources were left for the mass transit system itself. After the country regained independence in 1991, Lasnamäe’s housing and infrastructure dilapidated and many of the families that could afford to, fled the housing. However, others joined and Lasnamäe remains the largest housing district in the city with over 120,000 residents.

Learning from Lasnamäe: Community Corridors for the Future (by Emma Patiz and Nerali Patel)

Laagna Channel: The New Spine of Lasnamäe (by Alifa Putri and Chanel Williams) 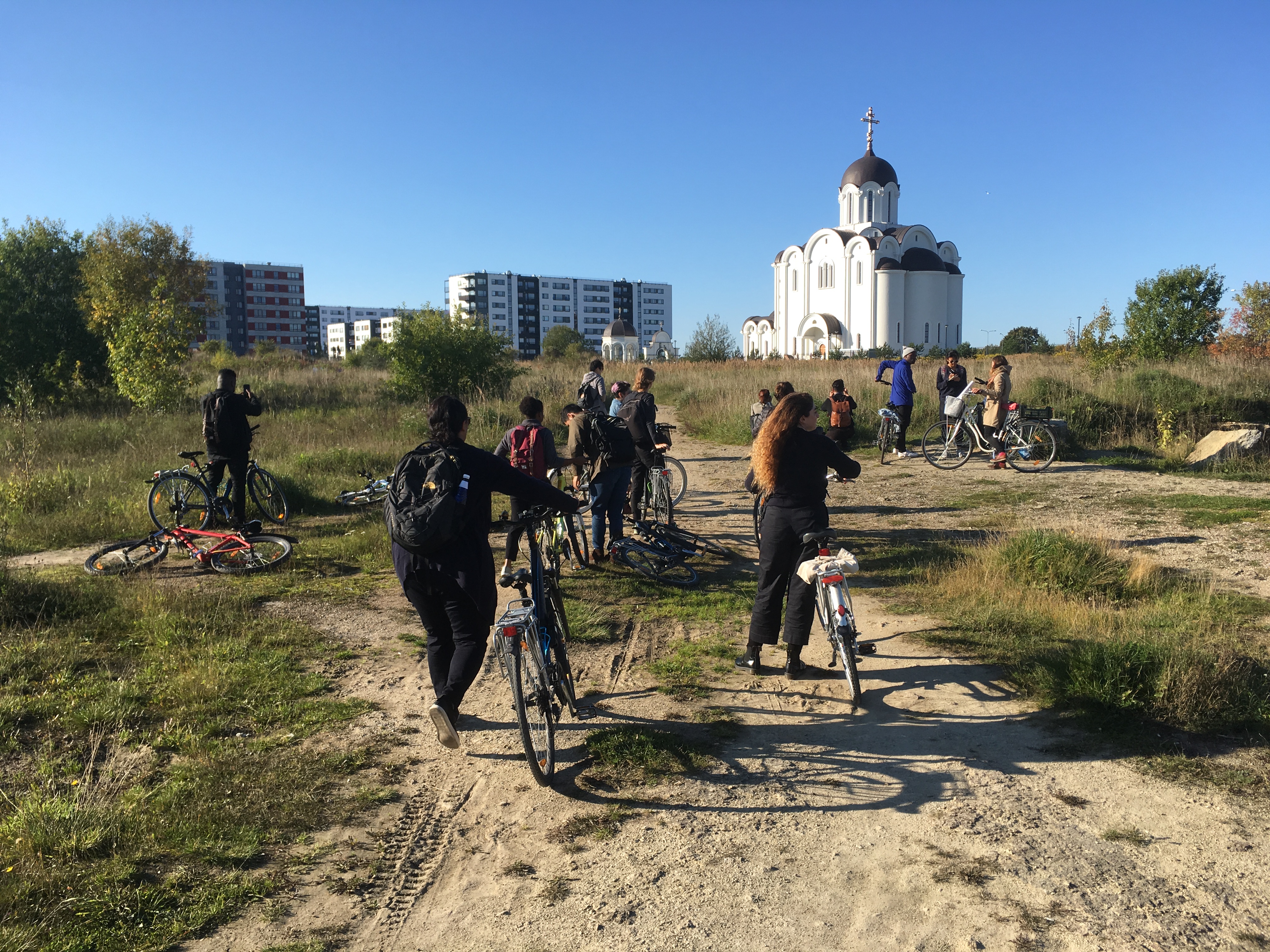 The “Unfinished City” studio at the Harvard Graduate School of Design (GSD) was implemented in fall 2017 in collaboration with the Estonian Academy of Arts(EKA) and Kapitel Real Estate. The studio involved eight graduate students from Urban Planning, two from the Urban Design and two from the Architecture degree program.

The studio’s focus lay on Tallinn’s largest residential district – Lasnamäe – built in the 1970s and 80s as the last of three Soviet prefabricated housing districts in the city. Even though Lasnamäe is known predominantly as a housing district comprising of over 120 000 inhabitants, our thematic emphasis lay not on housing per se, but on the regeneration of commercial, cultural and recreational sub-centers that the district direly lacks. Soviet planners, who developed Lasnamäe, saw housing for industrial workers as a priority that overshadowed the development of non-housing neighborhood amenities. Albeit part of the winning design scheme in 1971, most non-residential amenities, sub-centers as well as a district-wide center, never got built. Outdoor public areas – parks and civic spaces – were likewise deferred under Soviet development mechanisms.

The studio brief was divided into three parts. During the first month, student teams explored existing sub-centers in Tallinn, outside of Lasnamäe: the Rotermanni Center, Ülemiste Center, the Central Market, Nõmme Center, the Telliskivi Creative City together with the new Baltic Station market, and a small micro-rayon center in Mustamäe. Studying the spatial, economic and social functioning of these centers, students were asked to identify short- comings and opportunities considering Tallinn’s current and future trends.

The second phase, which started with a week-long site visit to Tallinn, focused on Lasnamäe as a whole, mapping, understanding and investigating the entire system of micro-rayon centers that were intended or partially built out. During the visit, Harvard students experienced Lasnamäe on bicycles, on foot, by bus and public transit and held a series of meetings with political representatives from the city and the district, with business owners and NGOs. Students also visited Lasnamäe on their own, funding further contacts and residents to talk to with the help of EKA partners. Together with EKA Faculty of Architecture and Urban Design, we held a joint day-long workshop, where mixed teams of EKA and Harvard students came up with analyses and preliminary proposals for Lasnamäe’s centers. The second phase culminated weeks later back in Boston, with district-wide proposals that identified sites and corridors where students saw the greatest potential for new civic spaces and amenity clusters, served by public transit. These proposals set up the stage for the remainder of the studio. The final and third phase asked students to develop a more detailed and granular proposal for one or several subcenters identified in the previous phase.

Six overarching issues that emerged in the course of the work are worth noting. First, students exhibited strong support for a future tram system that would better connect Lasnamäe with the city center. But as the projects that follow demonstrate, there were diverse opinions as to where the tram routes should be placed – some teams envisioned a tram in the Laagna Channel, completing an idea that Eliel Saarinen had proposed as part of his Grand Tallinn Masterplan in 1913. This option is explored in Donald and Armando’s, Taka and Sabrina’s, as well as Alifa and Chanel’s work. Others speculated that trams are fundamentally pedestrian-friendly and should belong on the upper, pedestrian level of Lasnamäe’s circulation system. Nerali and Emma’s project places the tram route on the northern upper edge of the Channel, eliminating the need for passengers to descend 8-meters down to a traffic-heavy artery. Alice and Yang, on the other, proposed a totally different vision, where the tram does not follow the Laagna Channel at all, but instead snakes through the deep interiors of neighborhoods and residential courtyards, providing better access to existing inhabitants and opening the hidden sides of Lasnamäe up to visitors.

Second, several teams saw great potential in implementing new “main streets” that would connect former micro-rayon centers to each other along more substantial commercial and civic spines. Just like other districts of Tallinn have their main streets, Lasnamäe too deserves its linear community centers, complete with shops, services, cultural amenities and high-quality public space. These linear typologies stand in contrast to the original nodal micro-rayon centers, connecting the latter as beads on a necklace, so as to enable access for more households and to align the notion of centrality with already popular walking paths.

Third, emphasizing the need to spatially integrate Lasnamäe with the rest of the city, several teams explored opportunities to add new north-south thoroughfares through Lasnamäe, which would connect the district better with Ülemiste in the south and Pirita in the north. Chenglong and Yue’s proposal, in particular, develops this idea in greater detail, routing a new public street from the eastern end of Ülemiste City, through industrial blocks and across Punane Street to the Pae Center, and from there on over the Laagna Channel to the Song Festival Grounds and the seaside. Just like Majaka Street, which the city already renovated and extended through a rail tunnel to the airport, transformed connectivity for the western side of Lasnamäe, similar transformations could result from adding more north-south connectors.

Fourth, Chenglong and Yue’s project also investigates how Lasnamäe’s vast Kvilia park could be knit together with Kadriorg park and Pirita River Valley to produce a connected, regional green amenity that could become home to major cultural, educational and recreational facilities in the future. Bringing museums, university campuses or monuments of national importance to Lasnamäe, would help integrate Lasnamäe with the rest of the city and improve its public perception.

Fifth, all teams investigated how future planning e orts could work with and for existing communities. Nerali and Emma’s proposal, in particular, envisions new main streets as “com- munity spines” by emphasizing public spaces, where people are most likely to interact with their fellow citizens – transit stops, community centers, markets, shared community gardens etc. Taka and Sabrina’s project lays out institutional mechanisms for Area Management Institutions, while Alice and Yang’s work emphasizes the role of condo associations and co-operative organizations. All redevelopment plans, these works remind us, should involve community members, affected residents and small business owners of Lasnamäe from the get-go.

Finally, our focus on Lasnamäe’s centers inevitably also created questions about the eventual need to replace some of the aging and poorly maintained building stock of the past. All new developments in Lasnamäe from the past two decades have been “in ll” developments – gradual additions of new buildings amid an otherwise built out district. None of the Soviet era apartment buildings have been demolished. Taking a long-term view and tackling a complex set of issues, several teams in the studio examined how neighborhood improvement strategies and a renewed development interest in Lasnamäe could, eventually, lead to a democratic, equitable and gradual replacement of the Soviet panel structures with newer, more livable and mixed-use buildings.

Previous discussions about redeveloping Lasnamäe’s residential blocks have gone in two, in our view, unproductive directions. On the one hand, a small minority of commentators in Tallinn have called for the wholesome demolition of Lasnamäe’s panel structures. This studio did not consider such prospects and found them to be both undesirable and impossible to implement. The more than 30,000 dwelling units in Lasnamäe were, after all, privatized in the early 1990s and any grandiose discussions of full- edged demolition have so far ignored the rights of this huge group of property owners, residents and communities, many of whom wish to continue their livelihoods, social and economic alliances in the district. Another, almost opposing viewpoint in Tallinn has been to leave Lasnamäe’s aging residential buildings alone, arguing that they are ne as they stand on the one hand and that there are no public resources or mechanisms available for their improvement on the other. We saw this viewpoint as problematic too, because housing conditions in Lasnamäe are significantly poorer than other parts of the city and Tallinn faces sever spatial inequality issues. A sizable portion of Lasnamäe’s residents lack the income and capital needed to afford alternative housing in other parts of the city – these residents are essentially trapped there. We did not think leaving Soviet-era housing blocks alone to degenerate over time was a viable or desirable choice in the long run.

To this end, we discovered an untapped resource that could help implement and finance a gradual, inclusive and democratic replacement of aging residential panel blocks – land. By mapping land ownership patterns in Lasnamäe, we discovered that most land between and around existing residential blocks is either municipally or state-owned. Several teams began to investigate how this hidden resource could be turned into a catalyst, enabling the city to develop neighborhood specific visions for a gradual replacement of aging housing stock. The publicly owned land is used as a form of subsidy that could induce private developers to build new replacement units that re-house resident associations who wish to accept a highly subsidized housing swap at sites near their current homes. Projects presented by Chenglong and Yue, Alice and Yang, and Taka and Sabrina in particular, explore this opportunity, proposing alternative mechanisms that would enable private, but clearly regulated developers to obtain land for new mixed-use housing free of charge or at highly subsidized rates, in return for rehousing the residents of nearby panel blocks that opt in to this choice. Developers could increase the housing density in the new blocks, adding market-rate housing to the replacement units. Residents who bene t from replacement housing would need to cover a portion (e.g. 50%) of the new unit cost themselves, potentially using low-interest loans backed by the state, while the remaining costs are covered by the value of public land that such developments stand on. Though myriad details of such a replacement mechanism would require careful further investigation, these students’ projects point out that such a solution would enable Lasnamäe’s residents to pre- serve social networks, daily routines, and familiarity with their neighbor- hoods, while gradually obtaining better houses and neighborhoods. They also remind us that Lasnamäe’s full potential cannot be achieved through in ll developments that create subcenters, main streets and cultural amenities alone – a gradual replacement of old housing stock will be equally important.

Andres Sevtsuk
↑ Back to top